The Sanctuary Recording Studio is a brand new facility located at the centre of the Albany resort in the Bahamas and its facilities and amazing location provide a world class residential studio environment. The building was designed by Danish architectural firm Bjarke Ingels, with the acoustic and technical design handled by U.K. based White Mark. White Mark in turn appointed Langdale Technical Consulting as the prestigious project’s installation company.

“I’ve known White Mark for over 20 years – they’re a company working right at the top of their particular pyramid. We first started having conversations about the project around two years ago, with White Mark carrying out much of the technical design.”

A no compromise approach to the acoustics and technical infrastructure of the studios make Sanctuary one of the world’s best residential facilities. The main studio features an SSL Duality console, Exigy main monitors and a staggering 500,000 US dollars of outboard equipment. In addition to the main studio and its associated live room there are 5 programming suites, 2 of which also have dedicated live rooms.

The complex’s copper cabling infrastructure is all Van Damme, with over 2 km of Blue Series analogue multicores and 1.1 km of Green Series AES/EBU multicores installed across the facility. 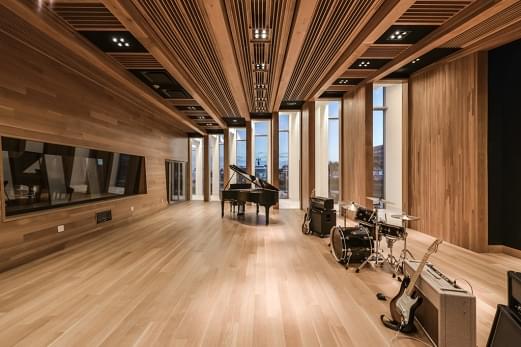