Van Damme at the core of Zaryadye Park

Zaryadye Park is an urban park and city landmark, located a stone’s throw from the Kremlin. It is the first public park to be built in Moscow for over 50 years. The popular attraction was inaugurated by Russian President, Vladimir Putin and featured on Time magazine’s list of ‘The World’s Greatest Places’. The park expects to receive up to 10 million visitors this year alone.
Zaryadye is a modern take on a traditional public park where historical and modern architecture blends seamlessly. It was created by an international team of architects and engineers, each allowing contemporary themes to influence their design.
Within the park is the Zaryadye Gastronomic center (food market). It was opened for visitors to experience a wide range of Russian foods, all within one place. The food market is divided into eight ‘gourmet islands’, each belonging to a different Russian region, where dishes are prepared according to their traditional regional recipes.
It is at the Gastronomic Centre that Van Damme’s Russian distributor, Sound Technology, were enlisted to take charge of lighting and audio on the project. Van Damme cabling was used throughout.
Audio and lighting systems were installed to help create the unique feel and atmosphere of the space.
Sound Technology commented: “With each section of the Gastronomic Center being so different, lighting and sound were necessary to create a unity amongst every area of the market”.
Van Damme Smart Control DMX 1 pair was used for the light installations and Black Series Tour Grade 2 core twin-ax for the PA system. A total of 720m of Van Damme was used for the project.
Sound Technology continued: “A harmonious and balanced sound was essential over the entire area of the room to create unity in the space. Van Damme cable allowed us to create an acoustic system that evenly distributes sound pressure around the perimeter, for a comfortable and harmonious sound”. 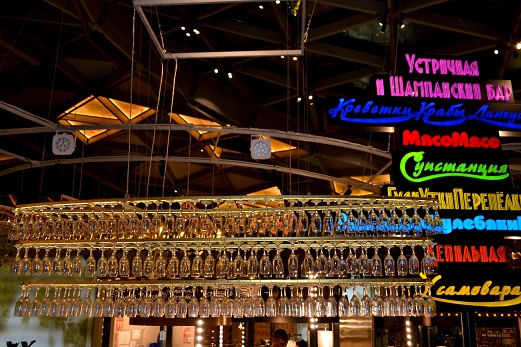